Worried about child care this Thursday (30th june) due to the school being shut? Then why not drop them to GSD at Caswell Bay for a day of safe fun on the beach from 08.30 a.m

As pointed out in the Swansea Evening post today (Sat 25/06)many parents are worried about what to do with their children when the schools are shut this week due to industrial action here is the article if you missed it > Strike action closes more Swansea Schools
GSD are glad to inform all worried parents that we will be at Caswell beach, Swansea from 0830 a.m and then collection will be at 15.30 so like a school day but way more fun!
We provide all the equipment and all our surfing coaches are enhanced CRB certified.
Simply book online via the following link > Junior surfing lessons or for last minute txt us 077 395 361 22
Make the most of the strikes learn to surf with GSD
About GSD (Gower surfing development)
Established over a decade ago, SurfGSD is one of the premier British Surfing Association approved surf schools. Recently featured on The Gadget show when Jason Bradbury had an indoor surfing lesson with us. Then Anna Richardson of the C4 Supersize versus Superskinny took an outdoor surfing lesson with us at Caswell Bay, Swansea. We have also been in the highly acclaimed Coast magazine, Times, Guardian, Observer, Daily Mirror, and the Independant. Our moto is Surfing for Everyone!

Posted by The Surfers map at Saturday, June 25, 2011 No comments: Links to this post

What did you say? (free kids entry to the waterpark every Sunday)


What did you say?

Sunday evenings at the LC just got better! With free kids entry to the waterpark every Sunday evening between 5-8pm, a family visit to the LC is the perfect way to end the weekend.
This very special offer will begin from Sunday 13th June and enable one free child entry to the waterpark with every full paying adult. Whether it'is the waves, the slides or the volcano bay that is your favourite, Sunday evening is now the ideal time to enjoy them all.
Why not plan ahead and end your weekend with a splash! Call our team on 01792 466500 to book now!
Posted by The Surfers map at Friday, June 24, 2011 No comments: Links to this post


Get fit for summer at the UK's biggest cycling event!

Cycling along the seaside promenade cycle path
Cwmtawe Cycle Group, who are celebrating their 10thanniversary this year, are marking National Bike Week with two organised bike rides.
The first one on Saturday 25th June is the Gower Beast MTB ride. It starts at the Gower Heritage Centre, Parkmill and takes on the five highest peaks in Gower - two on Cefn Bryn, Ryer's Down, Llanmadoc and Rhosilli which is 196 metres above sea level.  It finishes at the Gower Heritage Centre and costs just £2.00 per person to enter the ride and entry to the Gower Heritage Centre is free for riders.  All riders taking part in this ride must wear a helmet and have a reasonable level of fitness.
The second ride is the Annual Family Fun Bike Ride "Route-43-to-the-Sea" which takes place on Sunday 26th June and starts at 11:00am.  This ride is aimed at families and riders of all abilities with the emphasis on fun and enjoyment.  Leaving from the Pontardawe Inn in the heart of the Swansea Valley, the ride follows the course of the river Tawe along Route 43 of the national cycle network down to Swansea Marina.  After a break for refreshments, riders proceed at their own pace back to Pontardawe where entertainment, music and food are on offer at the Pontardawe Inn. Riders will need a serviceable bike (a bike doctor will be available to deal with any minor problems) and be capable of riding the total course length of 14 miles.  There is no time limit and marshals will be available at all times to assist where necessary.  Any riders under the age of 14 must be accompanied by an adult.
Chairman Richie Saunders formed the group ten years ago to promote and encourage safe cycling and campaign for more cycle paths.  This year the ride is a charity event in aid of the Ty Hafan Family Hospice for Young Lives.  Riders will be encouraged to raise money through sponsorship or pay a small entry fee.
Cycling is convenient - door-to-door with a  guaranteed arrival time
Cycling improves fitness, and fitter just by cycling regularly
Cycling opens your eyes to new surroundings - explore your local area and see what you discover
Cycling is great for commuting to work or school - arrive refreshed, alert and more productive
Cycling is green - every journey you make on your bike is one less in a car
For more information please contact Richie on 07891 508688 or emailsirseanesquire@gmail.com.
For the Gower Beast MTB Ride you can also contact the Gower Heritage Centre on 01792 371206 or email reception@gowerheritagecentre.co.uk. Or visit the Bike Week websitewww.bikeweek.org.uk
Posted by The Surfers map at Thursday, June 23, 2011 No comments: Links to this post

Celebrity chef has been sampling Swansea hospitality during filming for his new show.

Jamie Oliver in Oxwich Bay, Gower - courtesy of www.thisissouthwales.co.uk
The TV cook and food campaigner spent two days at locations in Mumbles and Gower fishing, barbecuing and learning about that great Welsh culinary institution — Italian ice cream.
Television bosses are staying tight-lipped about the chef's new project, but it is expected to hit screens later this year — and it seems it is going to have a Welsh flavour.
During his visit to the city by the sea he spent time at the family-run Verdi's ice cream parlour in Mumbles.
Sara Mouzzi, daughter of the parlour's founder Joe, said: "Jamie was fantastic — a really nice guy.
"He spent a couple of hours with us seeing how we make ice cream sundaes and knickerbocker glories, and having a go himself.
"He also spent a long time sitting and talking to my father about our Italian heritage, which he seemed to find really interesting.
"Afterwards he took the time to sign photographs and have his picture taken — he was wonderful.
"He then invited a lot of the staff to go surfing with him — but in the end the conditions weren't right so he invited them to a barbecue."
As well as trying his hand at ice cream, the popular cook took to the waters of Swansea Bay for a spot of lobster fishing — and was spotted hauling in lobster pots in Langland Bay. His trip finished with a barbecue in Oxwich Bay.
Jamie shot to fame during the late 1990s as The Naked Chef — and his cheeky Essex boy persona and easy-to-follow recipes quickly made him a hit with the public. He has gone on to create a TV, cook book and restaurant empire, as well as famously launching a campaign to improve the quality of school dinners.
In 2004 he was awarded an MBE.
One of the people to see the chef landing his catch of fresh lobster in Mumbles was freelance photographer Nick Thomas, from Langland.
The 33-year-old said: "I'd heard he was filming around Mumbles and popped down to Knab Rock. He hopped off the boat proudly brandishing two lobsters he had caught. He was really friendly and personable.
"The film crew obviously wanted to get on with the job but he took the time to stop and chat and pose for some pictures.
"He was just like he is on the telly — laughing and joking."
Extracted from South Wales Evening Post article by Jason Evans.www.thisissouthwales.com
Posted by The Surfers map at Thursday, June 23, 2011 No comments: Links to this post 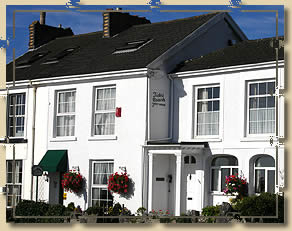 Situated in a prominent position, overlooking the promenade, Mumbles Head and Swansea Bay. Tides Reach Bed and Breakfast is an ideal base from which to explore the village of Mumbles, the Gower and the City of Swansea and surrounding areas.

Built in 1855, Tides Reach is a handsome, elegantly furnished and appointed guest house, offering bed and breakfast on the site of a previous Victorian bath house, providing the highest standards in comfort and service, whilst also providing an informal, friendly place to relax and savour the views.

Many different experiences are on offer - the City of Swansea, birthplace of movie star Catherine Zeta Jones and poet Dylan Thomas, and it is the only place in the UK where you can shop, eat out and enjoy a vibrant arts, entertainment and club scene yet be so close to an Area of Outstanding Natural Beauty. Gower has some spectacular coastal scenery including the view from the village of Rhossili, reputedly the eighth most photographed sunset in the world!


Caswell beach in picture below is 5 mins away from Tides Reach! 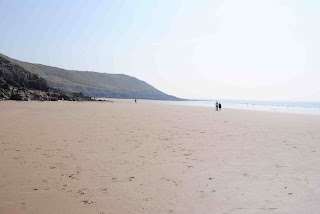 Posted by The Surfers map at Thursday, June 09, 2011 No comments: Links to this post

Unique Father’s day gift- Surf’s Up Daddy Dude!
Can’t think what to get your Dad this year?
Bored buying the same old socks/ pants/ beer?
Looking for something cool but will also trim his waistline?
Think your Daddyo needs some stoke in his life?
= A surfing lesson voucher is the answer!
For those Dads who are already waveriders- check out our new improved surf shop site www.shopgsd.com for  Fathers day surfing gifts

Posted by The Surfers map at Thursday, June 09, 2011 No comments: Links to this post

Another great review for The Surf School at Caswell Beach, Swansea run by Gower Surfing Development

Another great review for the surf school at Caswell Beach run by Gower Surfing Development (GSD)
I asked our new surf coach, Matt to txt me after the surfing sessions at Caswell beach yesterday to let me know how he got on and if the group had a good time.
Matt is a Swansea Student who works for the RNLI throughout the summer down in Cornwall & sent me the following txt: 'Great group,they really enjoyed it and so did I. I'd like to work with you guys again in September regards Matt'

This obviously made me feel very happy to hear so just to double check txt the headteacher leading the adventure activity week here is his txt reply:'Excellent thanks. Instructors great and children thoroughly enjoyed as always. Personally my most successful yet (at least 10 times standing!) can u invoice the school when u get back ? Enjoy portugal. Thx again'
Stoked, more happy repeat GSD customers!
To book your school group in or surfing lessons simply; book online: GSD online surfing shop or txt for last minute: 077 395 361 22
p's please make sure you book your surfing lessons before you get to the beach to avoid missing out!

About SurfGSD:
SurfGSD (gower surfing development) has been operating at Caswell bay for over a decade, SurfGSD is a premier British Surfing school. Recently featured on The Gadget show when Jason Bradbury had an indoor surfing lesson with us.
Then Anna Richardson of the C4 Supersize versus Superskinny took an outdoor surfing lesson with us at Caswell Bay, Swansea. We have also been in the highly acclaimed Coast magazine, Times, Guardian, Observer, Daily Mirror, and the Independant.
Our moto is Surfing for Everyone!
Posted by The Surfers map at Sunday, June 05, 2011 No comments: Links to this post